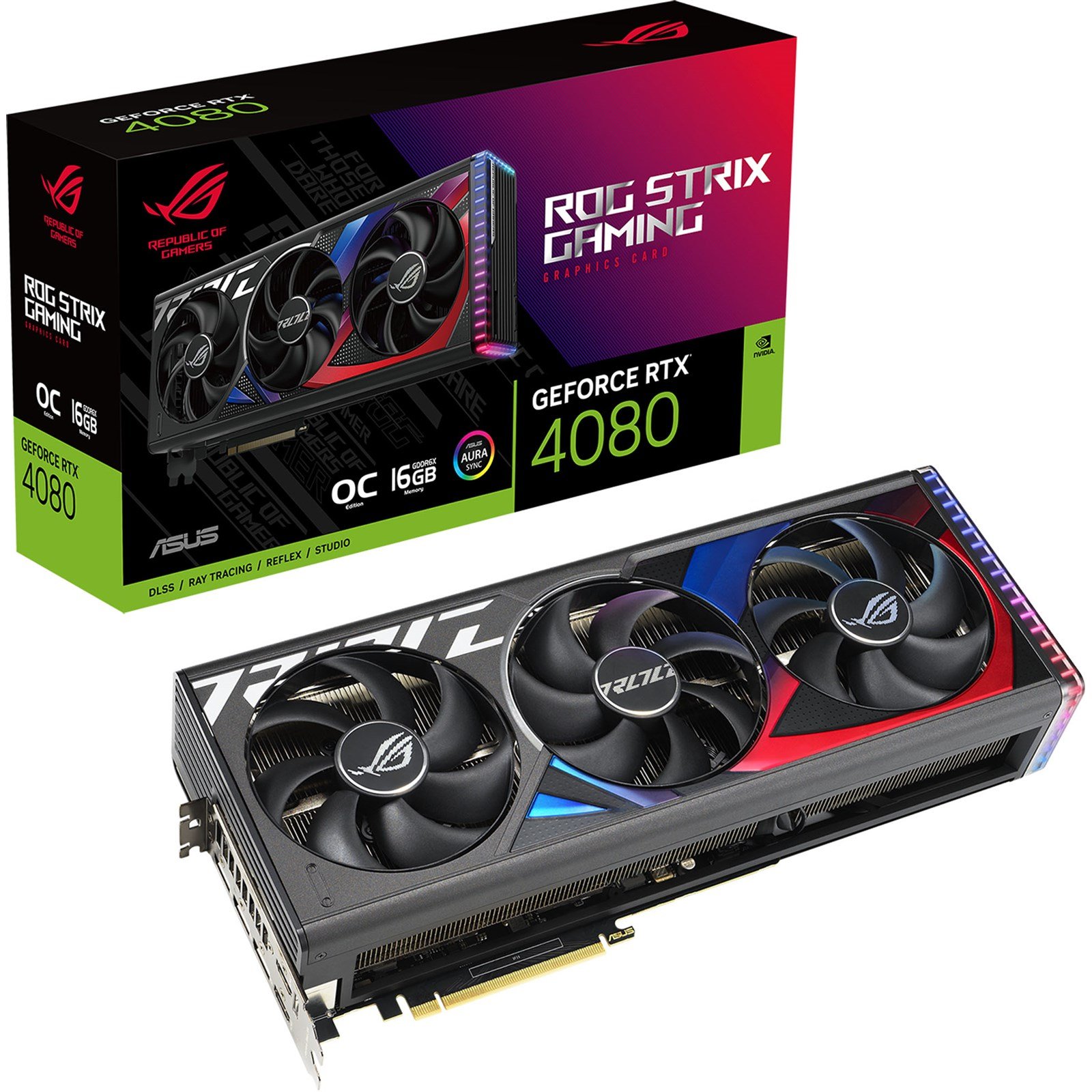 WITH THE INCREDIBLE SUM OF ITS PARTS

The ROG Strix GeForce RTX™ 4080 brings a whole new meaning to going with the flow. Inside and out, every element of the card gives the monstrous GPU headroom to breathe freely and achieve ultimate performance.

The unleashed reign of the NVIDIA Ada Lovelace architecture is here.

Bigger and better. Axial-tech fans spin on dual-ball bearings and have been scaled up to propel 23% more air through the card, setting the stage for lower temperatures, less noise, and higher performance.

The two side fans spin counterclockwise to minimize turbulence and maximize air dispersion through the heatsink. All three fans come to a standstill when GPU temps are below 50 Celsius, letting you play less-demanding games or perform light tasks in relative silence. Fans start up again when temps are over 55 C, referencing a speed curve that balances performance and acoustics for work or play.

Through Thick and Fin

The custom sink is generously sized and structured to soak up heat from the GeForce RTX 4080 GPU so that it can be efficiently whisked away by the three Axial-tech fans.

A vapor chamber featuring milled pathways lets the heatpipes sink in without being pressed flat, allowing heat to be carried more efficiently to the fin stack. In comparison to conventional vapor chamber and heatpipe combos, this potent pairing reduces GPU temperature by up to 5 Celsius when subjected to a 500W thermal load.

Component and trace layouts have been optimized onto a short PCB to reduce power losses and let heat escape through a massive backplate vent.

GO WITH THE FLOW

It all comes together to effortlessly drive GeForce RTX 4080 performance to the max.

Two PWM FanConnect headers provide additional DIY flexibility. Chassis fans can be directly attached to the card and tuned with a curve that is based on CPU and GPU temperatures, delivering extra intake or exhaust for demanding 3D tasks.

A GPU bracket provides extra stability to the critical connection between die and heat spreader. The rear I/O bracket is made from stainless steel to prevent corrosion in humid climates and provide a more resilient mount. A conveniently placed Dual Bios switch allows quick selection between “performance” and “quiet” speed profiles for the Axial-tech fans.

Auto-Extreme Technology is an automated manufacturing process that sets new standards in the industry by allowing all soldering to be completed in a single pass. This reduces thermal strain on components and avoids the use of harsh cleaning chemicals, resulting in less environmental impact, lower manufacturing power consumption, and a more reliable product overall.

Aura-compatible ARGB lighting elements on the shroud and rightmost perimeter of the card provide endless possibilities for personalization with color or functional effects. Pair up with a vast range of compatible system components and coordinate the glow to create a build that’s uniquely you.

The bundled graphics card holder banishes sag and also contains a screwdriver to help you build.

The live draw will take place once the maximum amount of tickets has been reached (9999). If all tickets do not sell out, the draw will happen on November 28, 2022 regardless.

The live draw will take place on November 28, 2022. If all the entries are sold sooner the draw will be brought forward. Keep updated on the confirmed draw date via our Facebook page and website.