LEGO® Marvel Hulkbuster (76210) captures the scale and power of the Hulkbuster MK44 from Marvel Studios’ Avengers: Age of Ultron. Standing over 52 cm (20.5 in.) tall and containing 4,049 pieces, this challenging and rewarding construction project is designed with adult enthusiasts in mind.

Authentically engineered
The model features a multitude of movie-accurate features. Within the dark red armour and strategically positioned golden plates lies a spacious cockpit, from which the LEGO Marvel Iron Man Figure (76206) – sold separately – controls the heavy-duty armor. The set also includes an information plate and a Tony Stark minifigure.

LEGO brick kits for adults
This model is part of an extensive range of LEGO Marvel Sets for Adults.

Authentic details – The model incorporates 3 light-up arc reactors (1 in the chest and 1 in each hand), a fully jointed upper body and a spacious, opening cockpit 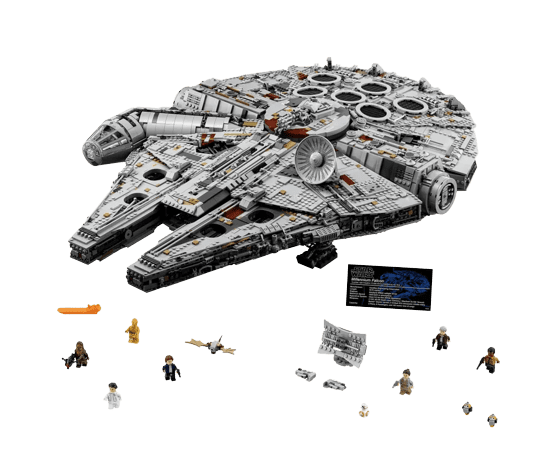 Welcome to the largest, most detailed LEGO® Star Wars Millennium Falcon model we’ve ever created—in fact, with 7,500 pieces it’s one of our biggest LEGO models, period! This amazing LEGO interpretation of Han Solo’s unforgettable Corellian freighter has all the details that Star Wars fans of any age could wish for, including intricate exterior detailing, upper and lower quad laser cannons, landing legs, lowering boarding ramp and a 4-minifigure cockpit with detachable canopy. Remove individual hull plates to reveal the highly detailed main hold, rear compartment and gunnery station. This amazing model also features interchangeable sensor dishes and crew, so you decide whether to play out classic LEGO Star Wars adventures with Han, Leia, Chewbacca and C-3PO, or enter the world of Episode VII and VIII with older Han, Rey, Finn and BB-8!

Figures include a BB-8 droid, 2 buildable Porgs and a buildable Mynock.

Change out the features and crew characters to switch between classic and Episode VII/VIII versions of the Millennium Falcon!

Slide the panel to reveal the concealed blaster cannon. 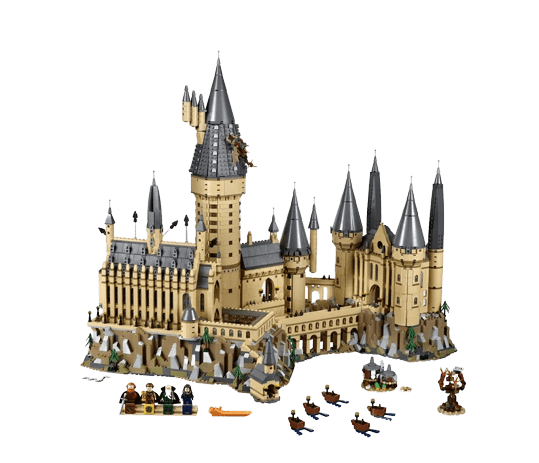 Make the magic come alive at the LEGO® Harry Potter™ 71043 Hogwarts™ Castle! This highly detailed LEGO Harry Potter collectible has over 6,000 pieces and offers a rewarding build experience. It comes packed with highlights from the Harry Potter series, where you will discover towers, turrets, chambers, classrooms, creatures, the Whomping Willow™ and Hagrid´s hut, plus many more iconic features. And with 4 minifigures, 27 microfigures featuring students, professors and statues, plus 5 Dementors, this advanced building set makes the perfect Harry Potter gift.

Take a seat in the Great Hall and feast with the Hogwarts™ professors and students!

Sneak your way into the Chamber of Secrets™ through the secret entrance and face the Basilisk!

Attend a Defence Against the Dark Arts class to learn how to protect yourself from dark magic!

Study for your Ordinary Wizarding Level exams in the library.

Microfigure accessories include 2 chess statues and the Architect of Hogwarts™ statue.

The live draw will take place once the maximum amount of tickets has been reached (7999). If all tickets do not sell out, the draw will happen on November 9, 2022 regardless.

The live draw will take place on November 9, 2022. If all the entries are sold sooner the draw will be brought forward. Keep updated on the confirmed draw date via our Facebook page and website.