3rd Generation Tensor Cores: Get up to 2X the throughput with structural sparsity and advanced AI algorithms such as DLSS. These cores deliver a massive boost in game performance and all-new AI capabilities.

Axial-tech fan design has been newly tuned with a reversed central fan direction for less turbulence.

The live draw will take place once the maximum amount of tickets has been reached (1999). If all tickets do not sell out, the draw will happen on June 24, 2022 regardless.

The live draw will take place on June 24, 2022. If all the entries are sold sooner the draw will be brought forward. Keep updated on the confirmed draw date via our Facebook page and website.

Signup for news and special offers! 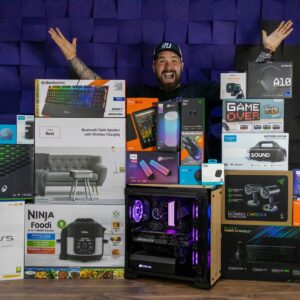 A legend from Chelmsford bought a 🎟 for 3090TI PC - 60 INSTANT WINS! about 2 minutes ago
Donkification!

A legend from Tandragee bought a 🎟 for 3090TI PC - 60 INSTANT WINS! about 1 minute ago
Donkification!

A legend from London bought a 🎟 for 3090TI PC - 60 INSTANT WINS! about 2 minutes ago
Donkification!

A legend from Burntwood bought a 🎟 for 3090TI PC - 60 INSTANT WINS! about 11 seconds ago
Donkification!

A legend from Haverhill bought a 🎟 for 3090TI PC - 60 INSTANT WINS! about 2 minutes ago
0
Your Basket
Your basket is emptyReturn to Shop
Apply Coupon